One day I turned my monitor on and it started flickering really quickly. After around 30 seconds or so it would come right until I turned it of again. I didn't get a video of it but it was the same as this video . I have had the monitor for almost ten years so I am not surprised to see it begin to die. I left it for a few days and then finally got around to looking up the problem. 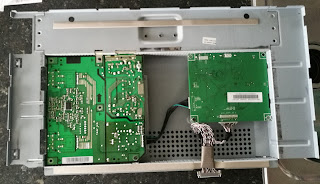 It turns out that this is quite common, on the power board there are three capacitors that can fail. So I thought I would at least have a look to see if it is the same problem. 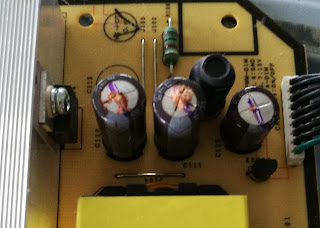 Sure enough once I had the board open there were two burst capacitors and one bugling capacitor.

I checked my local JayCar store but they only had one of the capacitors I required (320μF 25v) so I ended up ordering the other two 820μF 25v capacitors from RS Components. There were two other similar capacitors I decided to replace as well, both are 680μf 25v. I had never ordered by RS Components before but they arrived very quickly in only 3 days from Australia. Although I had to order five or ten of them.

Success! Putting the monitor back together and is now good as new, hopefully for many more years to come 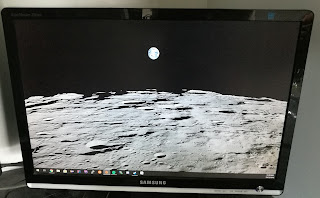