A few years back (2018?) I picked up a non-working Tempest Programmable TV Game cheap off of TradeMe to see if it was repairable. When it arrived it had looked like it had been left outside for a bit or in a shed somewhere. The inside of it was filthy and there was some corrosion on the circuit board. I cleaned it out but since I did not have any cartridges for it there wasn't much I could do. At this point I just put it away in storage and forgot about it.

Fast forward to 2021 I decided to give it a proper attempt and repairing it. It should be possible as the majority of the console is found in the cartridges and the console itself just an interface to the controllers and buttons. A sourced a copy of Supersportic for testing but the cartridge condition was a little suspect on whether it would work or not so I also bought a copy of Submarine that was in much better condition. 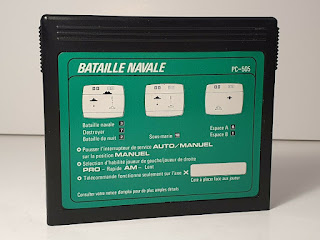 These consoles connect to a TV via RF so the first thing I looked up was if it was possible to get a composite video signal. I came across John's Retro Workshop which detailed how to generate a composite signal with a simple circuit. Unfortunately this didn't work and I wasn't getting any sound from the internal speaker (sound is not sent over RF).

Looking closely at the board some of the traces had started to corrode. Testing the continuity they still made a connection but I still put a couple of bodge wires to jump parts that looked particularly bad. 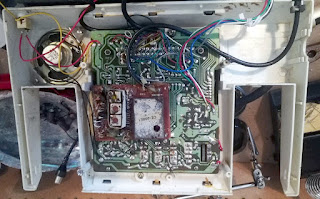 The next thing to do, like in most old console repairs, is to replace the electrolytic capacitors. They are at least 40 years old at this point. Having a closer inspection of the capacitors showed that some were a bit crusty and likely have dried up. I replace all but one as I didn't have a replacement on hand. 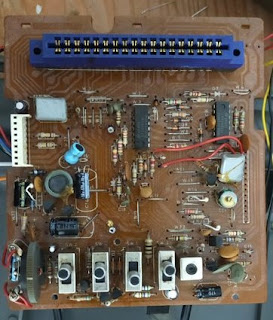 This still didn't bring it to life, I tried another circuit for video out that I had found on Les Docs but got the same result (nothing).

At this point I started to wonder if the cartridges were bad as the main board in the console was so simple but there are two ICs that I hadn't checked. Both are labelled MM74C04N and fortunately they are cheap to source. Once they had arrived from AliExpress I removed the originals and put the replacements in with a socket.

Just like that, the console's speaker sprung to life with game sounds. I reconnected the RF cable and tuned the TV. I was getting a picture! 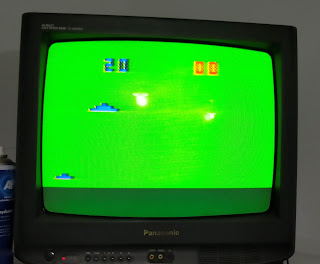 Time to try the John's composite circuit again. It works perfectly, I randomly choose a ceramic capacitor from the pile that I have and it seemed to the correct value.

My test circuit I created for the composite video mod was rather rough so I have designed a PCB to make it cleaner (ordered it from JLCPCB this time as their shipping to New Zealand is cheaper than PCBWay again). Once the PCB arrives I will use it to create a 'multi-out' plug using the same pinout as my Sega Master System cable rather than the hardwired RF cable.

I'll provide the gerber files for the circuit once I have confirmed that it is working.