Following on from my 3D Glasses modification for the Master System 2 I wanted to see if I can add the 3D Glasses support to the Mega Drive. I have seen posts online asking if it could be done and the original Power Base Converter did support the 3D Glasses adaptor so it should be possible.

Since I will be pairing up the Mega Drive 2 with an American 32x I need to also implement a 50/60hz and region modification using a single switch. On top of this I decided to install the Crystal Clear Audio board to enhance the Mega Drives audio. 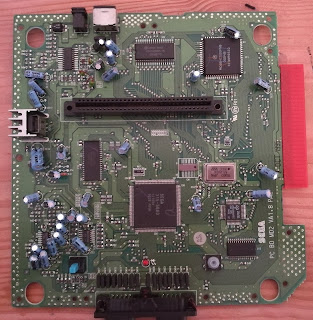 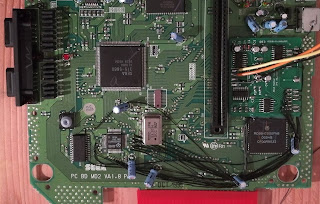 Next I installed the Crystal Clear Audio board. I wanted to make this tidy and didn't have much space to mount the board I decide to try have place it in the same location as the capacitors that need to be removed. The way I did this was to remove all the capacitors and solder some wires to each of the required locations on the Mega Drive board. The wires were then angled outwards so that the CCAM board can be placed in the middle.

I used a dab of hot glue to place the audio board in the correct location and to keep it from resting directly on the Mega Drive board. Using the remaining capacitor near by and the power switch gave it a bit more stability. With the wire angled outwards I was able to then start routing the wires and clipping them short so that they were just the right length to reach the audio board.

The last modification that I need to make is the 50/60hz and region switch. Reading this thread on assemblergames.com it describes how to set up a single switch to support PAL 50hz, NTSC 60hz and JAP 60hz along with a separate LED colour for each region using a couple of resistors. Again wanting to keep the modifications clean I decided to design a small circuit board that would use surface mount resistors and a tri-colour LED instead of three separate LEDs. Download the circuit board design.

The board worked correctly except in two of the modes the colour of the LED (both LED form factors) looked almost identical. To fix this I removed one of the resistors (marked '5' on the board) which resulted in the colours: blue, purple/violet and red. I could have played around with the resistor values but I was happy with the three colours.