I picked up a broken model one Sega Saturn that from the description of the auction suggested that only the fuse was blown from plugging in the wrong voltage. In New Zealand our mains power runs at 240 volts and this was likely a US console that runs on 110 volts.

After receiving the console I opened it up and yup, a blown fuse. 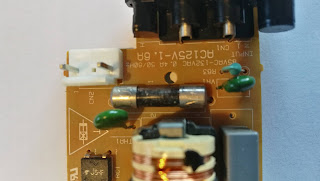 I could easily replace the fuse but I do not own a step down converter to be able to run the console. With original replacement power supplies not the easiest to come by I decided to go with the replacement using a pico PSU following Global Garage's video.

I ordered the power supply from AliExpress and waited the few weeks for it to arrive.

The various models and revisions of the Saturn had different PSU units, some are inter-changeable and some aren't. Most, if not all, use a five pin header to connect to the main board of the Saturn but the voltage and current on each pin varies. Luckily they are printed on the board but it is best to confirm the values if possible. I could not as I don't have step down converter.

This Saturn requires +3.3v, +5v and +9v with the other two pins connected to ground.

The pico PSU arrived. The PSU will supply all the voltages I require except for +9v. To get +9v I used a 7809 voltage regulator that takes in 12 volts and outputs 9 volts. In Global Garage's YouTube video they wedged the regulator underneath the small metal latch that holds the plastic insulator down. I decided to use one of the RF shield screws to mount it. This should hopefully help dissipate the head nicely as well. 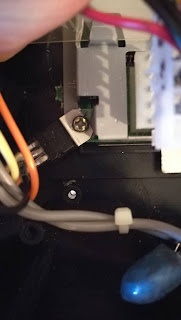 I used a six pin plug to connect the power wires to the pin header so that it would be easy to disassemble if needed. 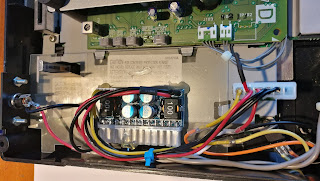 Using a generic 12 volt laptop wall adapter I plugged in the Saturn. The green power light turned on but only briefly. I started to check all the different points of power supply and double checked my connections thinking there was an issue with what I did. But it actually turned out to be a faulty power switch. It is supposed to toggle on and off but will only stay on when held down. I had an old model two that is faulty but the power switch mechanism is the same despite the shape of the button in the case. Desoldering the switches and swapping them worked perfectly.
at July 07, 2018