I saw an Atari 7800 for sale on TradeMe and I had never owned one before so I decided to place a bid of $95. It came with 3 paddle controllers (only one had the 'knob'), a two button Atari controller, power supply and the game cart Combat. The game also had the manual and box but the box has seen better days. 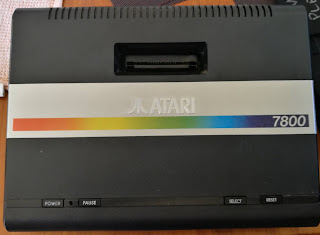 The Atari 7800 only has RF out but hunting around online I saw that it is easy to modify so that it has composite video out. I decided to use the guide on TFW8b.com as this is PAL machine. For the circuit I used the amplifier schematic on puppetmarl's post on the AtariAge forums. 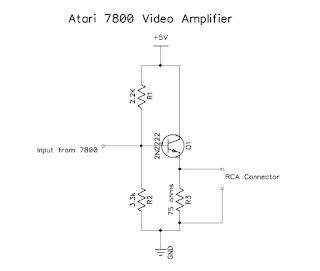 So I opened it up to have a look inside and I saw a brownish substance on the top of the inside case. Turns out the capacitor where the power comes in had blown, must have been a bit of bang. Luckily I hadn't turned the console on before hand. Perhaps this is why the image of the console running on the auction page was black and white? One of he other smaller capacitors had some gunk around it's base so I replaced all the capacitors 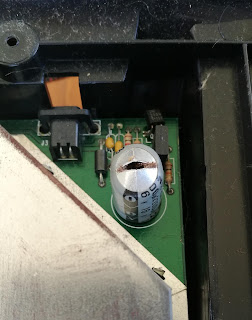 After replacing the capacitors I also removed the RF modulator as this will be where I put the video amplifier circuit. 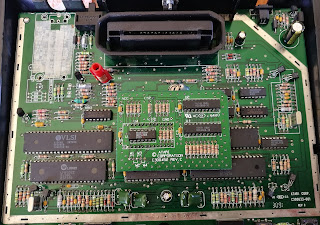 I made a small circuit and wired it up per the TFW8b guide. I joined R33 and R32 on the underside of the board for the POKEY audio. I used pin headers so that i can disconnect the board from the video plug in case I need to remove it again. The hot glue around the plug is there to hold it in place while the epoxy hardens. 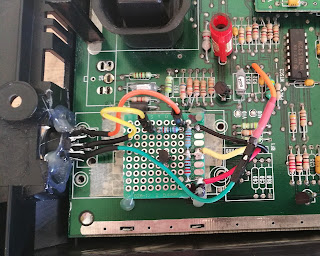 Most tutorials for adding in composite video to the Atari 7800 make use of RCA jacks and drilling into the case. I would rather not damage the case so I used the same 8-pin mini din connector with the same composite wiring as my Sega Master System AV mod. This fits nicely in the space vacated by the RF modulator but did need to be epoxied in place. 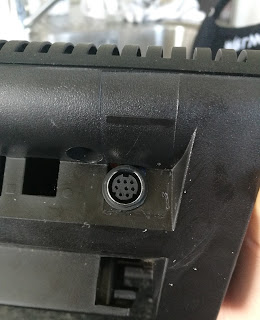 Success! The blown capacitor didn't fry the system after all. 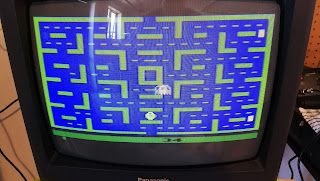 I don't have any Atari 7800 only games but my collection of Atari 2600 games ran perfectly along with the built in version of Asteroids.